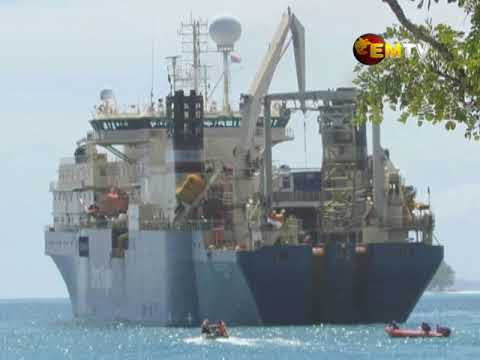 Technology is increasingly becoming an important part of human life. Most of what we do today is influenced by our use of technology. As a developing country, PNG is seeing changes unfold caused by the technological revolution with the help of China.  Many people now are slowly depending on their computers or smart phones to help them do things for their survival. One can access their bank account to transfer money from one account to another using their smart phone with access to the internet. There is no need to walk physically to the bank to manually fill in a withdrawal and deposit form. In addition, one does not need to stand in a long line to complete the transaction.  COVID-19 is now seen as a catalyst for the technological revolution. The fear that we might expose ourselves to the virus if we come into close contact with others is changing human perception and behaviour. We now want to find out how best we can use technology to do some of the things that we do as human beings i
1 comment
Read more

Importance of the Daru fisheries industrial park to PNG 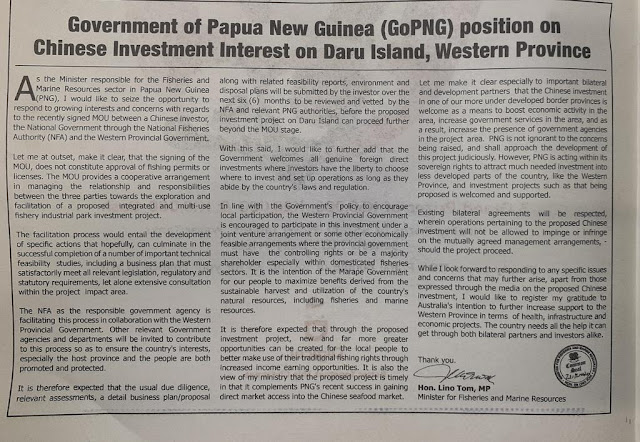 The island of Daru has become the center of attention after a Chinese company decided to build a multi-functional fisheries industrial park on the island. There has been both negative and positive comments made about the investment project based on economic, political and security interest of various state actors. More importantly, economic and security interest outweighs the political interest if you look at the investment project from a PNG perspective.   The MOU was signed on November 12 in Port Moresby by; the Governor of Western Province, the Minister for Fisheries and Marine Resources including the General Manager for Fujian Zhonghong Fishery Limited. The Minister made it clear in his recent statement that the MOU... "provides a cooperative arrangement in managing the relationship and responsibilities between the three parties towards the exploration and facilitation of a proposed integrated and multi-use fishery industrial park investment project." Photo from Twitter
6 comments
Read more

China, PNG and the principle of non-interference 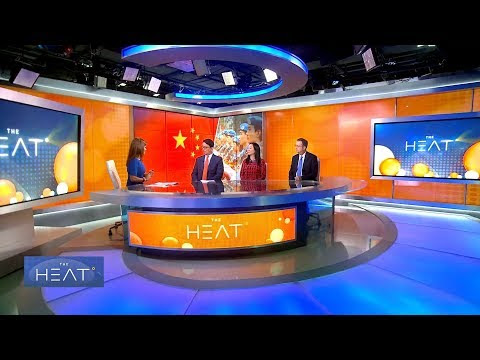 China is the largest of all Asian countries. It has the largest population of any country in the world. The population factor is a driving force behind the growth and transformation of the country. The Chinese government will need to carry out massive projects and programs to ensure the population is happy and healthy. Apart from domestic projects and programs, the Chinese government will also need foreign policies that complements what is happening domestically. For example, a foreign policy of war or foreign intervention will be detrimental to the growth of the Chinese economy. As such, China has practiced a foreign policy of non-interventionism based on the five principles of peaceful coexistence : mutual respect for each other's sovereignty and territorial integrity mutual non-aggression  mutual non-interference in each other's internal affairs equality and mutual benefit peaceful coexistence China's foreign policy of non-intervention is aimed at creating a pea
Post a Comment
Read more 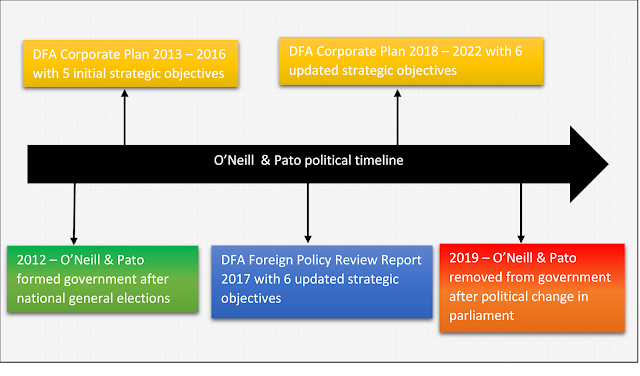 The Foreign Policy Review Report (FPRR) written by the Department of Foreign Affairs (DFA) in June 2017 listed international trends that are either political in nature or concerns our security. These significant developments have influenced the behavior of states and non-state actors in the international system in the past 40 years. The list includes: the collapse of the Soviet Union and emergence of freshly-independent countries; the economic reforms in the 1990s, and the global financial crisis of 2007-9; enlargement of the EU, followed by preparations for the UK's withdrawal (Brexit) following the June 2016 referendum; the global spread of terrorist threats; what is widely to be a new Asian Century shaped by China, India, and increasingly determined by the rise of these economies as well as the role played by ASEAN; instability and conflicts in the Middle East, including the flight of refugees; threats to resort to the use of nucl
2 comments
Read more 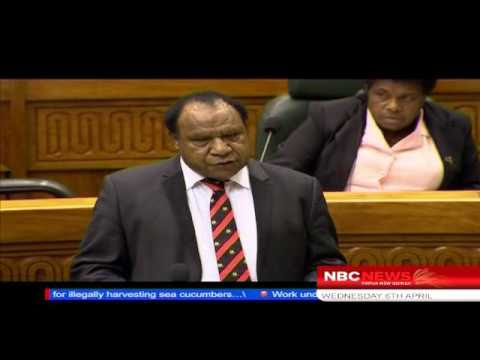 One hallmark of foreign policy analysis as a sub field of international relations is 'multilevel' according to Valerie Hudson and others. It is important to understand how the different variables at the individual, state, or system level of analysis affect the foreign policy decision making process. The focus of this article is on the roles played by political executives including the bureaucracy at the state level of analysis. These human decision makers do not operate in a vacuum but function in a legalized political system. The nature of legalized political systems varies when comparing one state to another.  In PNG, we are more familiar with the Westminster political system. For example, Section 142 (1) of the PNG Constitution established the office of the Prime Minister and mentioned the role of the Head of State (Governor General). An elected parliament is another key body that is mentioned together with political parties. These offices and bodies are key elements in a
4 comments
Read more 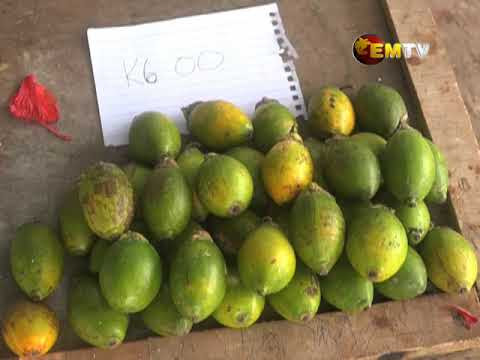 At the moment, the news about the second case in East New Britain Province is causing panic and anxiety among citizens. I am anxious as I ponder about the possibility of the virus spreading in Madang and the future of my nuclear and extended family members. Stephanie Lawson talked about the 7 human security issues in her book titled 'International relations' . In 2018, I wrote 2 blog articles to help my students develop a basic understanding of human security. The first article talked about the first 3 human security issues, and the second article talked about the last 4 human security issues. Her discussions were derived from the Human Development Report published by the UNDP in 1994. The Report outlined the changing trend in security studies where security was no longer an issue of states defending themselves against other states evident in the Cold War. The traditional state-centric approach was replaced by a human centric conceptualization of security. The 7 hu
Post a Comment
Read more

COVID-19 a catalyst for use of Moodle in higher ed? 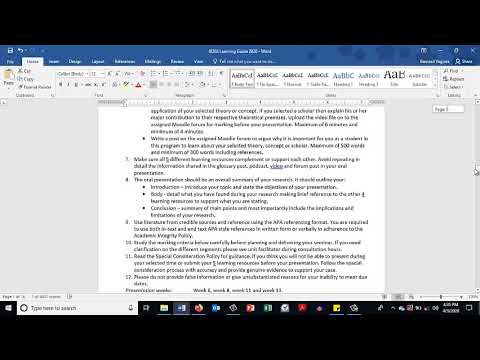 Bernard Singu Yegiora
Madang, Momase, Papua New Guinea
This blog is where I share my thoughts, experiences and challenges.